Donnie Yen is Qinglong (Green Dragon), the foremost member of the Jinyi Wei, a secret police force serving the emperor. Brutally selected and trained from childhood, they are the Emperor's elite warrior-assassins. Dispatched to recover a list of traitors, Qinglong discovers he has been used by the chief eunuch in a scheme to gain the imperial seal, which the traitor intends to use in support of an usurping prince. 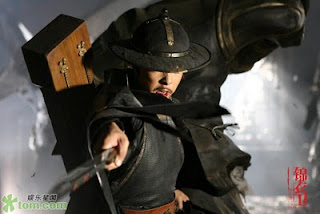 Betrayed by his fellow Jinyi Wei, Qinglong goes rogue. When he encounters the Justice Escort Agency, the movie opens up. Qinglong develops a glancing romance with the chief's daughter, Qiao Hua, portrayed by my Chinese girlfriend, Zhao Wei. You might remember her as the cute tomboy in So Close or as the cute tomboy in Warriors of Heaven and Earth or the cute tomboy in Red Cliff.... But she's very good at that role, and the scenes including her breathe life into an initially gloomy tale.

The film's title refers to a box of 14 bladed weapons, each of which serves a different formal purpose. Seeing the box in action is fun, but perhaps not quite as clever as all the build-up would make you hope. Still, for those who like to cross the streams and mix a little steampunk into their wuxia, there's a lot of fun here.

The movie pits several worthy adversaries against Donnie Yen's hero. Sammo Hung is ominous as Prince Qing in an all-too-brief role. Kate Tsui wields a whip-blade and employs a pretty evasion/striptease trick as the assassin Tuo Tuo. Wu Chun is sufficiently boy-band pretty to play second fiddle to Yen as Judge, leader of the Heaven Eagles.

Another of the film's virtues is its use of rival factions banding together for a common purpose. There aren't many surprises, though. When Judge picks a fight with Qinglong, you just know they're going to end up on the same side. And if you don't anticipate the tragic ending, it's only because you love Zhao Wei too much to see her heart broken. Predictable as the story may be, the events unfold with elan. 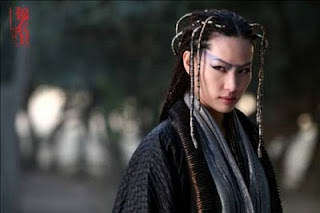 It might not reach the heights of Detective Dee or Reign of Assassins, but 14 Blades is another film I wish I'd seen before finishing Master of Devils. It probably won't appeal broadly outside fans of the genre, but it's full of exciting action scenes and enough inspiration for a GM to create months of Tian Xia adventures.
Posted by Unknown at 12:01 AM