Where do you draw the line in using terms with proper-name origins in an alternate world setting?

I recall the anecdote about a Ravenloft author inventing the term "air moss" because "Spanish moss" was right out. This past week's word-of-the-day list includes terms referring to characters in Dickens. While a child-training thief like Gaedren Lamm from Pathfinder's Curse of the Crimson Throne  might be perfectly described as a "fagin," you couldn't actually use that term without throwing every English major in the audience.

Sometimes the call isn't so obvious. It's all right to use "mesmerized," isn't it? "Hypnotized" sounds even goofier in an alternate world fantasy, but the former term has a guy's name in it. On the other hand, "Damascus steel" is right out.

What are some real-world terms that you'd think twice about using in an alternate world setting? And what are some that you think are questionable but okay?
Posted by Unknown at 3:44 PM 7 comments:

Elaine Cunningham has released the second in her Tales of Sevrin novellas. Check out Honor Bound in Kindle format, or start from the beginning with Honor Among Thieves. 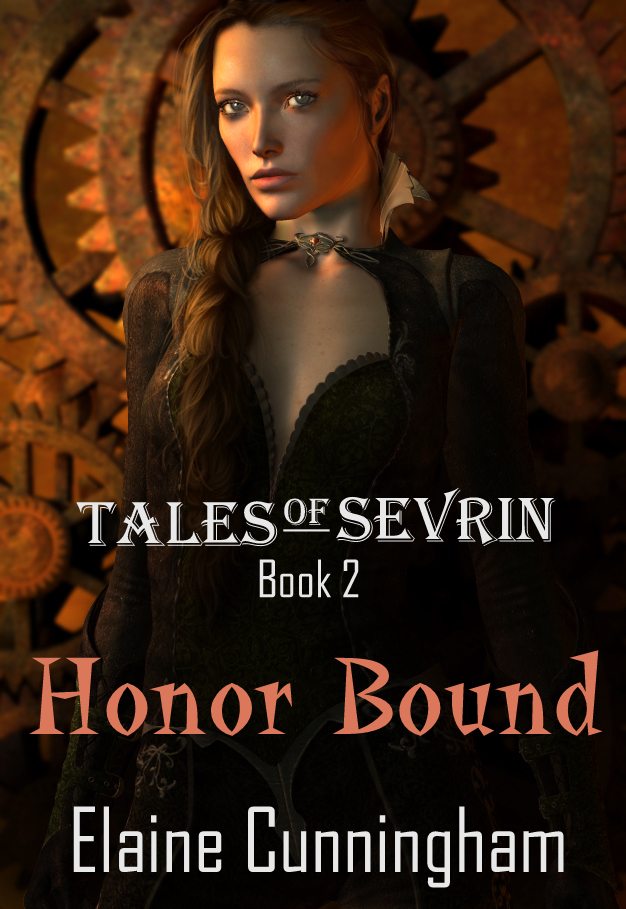 Also available at Smashwords: .MOBI versions of Honor Among Thieves and Honor Bound. 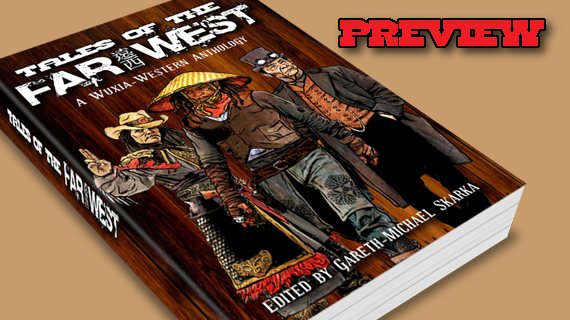 Adamant Entertainment's Far West Kickstarter campaign was so successful (ending up with nearly ten times the original goal) that Gareth-Michael Skarka began adding additional rewards for supporters. One of the first was the fiction anthology Tales of the Far West.

The book features stories by, among others, Scott Lynch (here's a free preview of his story), Matt Forbeck, Chuck Wendig, and Yours Truly.

The Kindle version is now available at Amazon, and ePub and PDF versions are coming soon.

While my Pathfinder novels haven't (yet) reached as wide an audience as my previous novels, they've garnered far more reviews. I'd love to see even more, especially on Amazon and Goodreads.

While the reviews have been gratifying and often useful, I've seen little comparison of the Varian & Radovan stories, primarily Prince of Wolves and Master of Devils (but also of the novellas "Hell's Pawns" and "Husks," and the short stories "The Lost Pathfinder," "A Lesson in Taxonomy," and "A Passage to Absalom").

So please satisfy my curiosity: If you've read both of the R&V novels, which book did you prefer (and why)? What elements of the ongoing back story do you care most about?

Please comment here, and if you ask any questions I'll try to answer them promptly.

Jeremy Dawson is doing an interesting thing at his podcast site. To start the new off with a new format, he's reviewing books and also interviewing the authors. This past week he quizzed me on Prince of Wolves, posting our conversation in text and adding an audio recording of his thoughts on the book. Both appear on this page (click on the first paragraph for the interview).

I've just sent him my answers to his questions on Master of Devils, which I expect he'll post with an audio review on Monday. Go take a listen and comment on his blog.

Posted by Unknown at 8:33 AM No comments:

Paizo has uploaded seven more ePub stories, all included in their three-for-the-price-of-two fiction sale until the end of January. Among them is "A Passage to Absalom," the ship-board mystery set between Prince of Wolves and Master of Devils.

The new ePub files include:

The Ironroot Deception by Robin D. Laws
Plow and Sword by Robert E. Vardeman
A Passage to Absalom by Dave Gross
The Seventh Execution by Amber E. Scott
The Box by Bill Ward
Blood and Money by Steven Savile
Guilty Blood by F. Wesley Schneider

Remember that you can read all of the short fiction (but not the novellas, which appear in the Adventure Paths) for free at the Web Fiction page. Then you can load up your e-reader with your favorites.
Posted by Unknown at 10:14 AM No comments:

Until the end of January, the classic buy-two-get-one-free sale hits Pathfinder Tales. That applies to both the novels and the stories in either print or electronic format when you buy them from paizo.com. Here's a great chance to fill out your novel collection or to check out any stories or novellas you've missed. The stories and novellas include some terrific interior art.

I'm hopeful that the story "A Passage to Absalom" will be available in ePub format soon. The latest is the novella "Husks," currently appearing in the Jade Regent Adventure Path.

Other Notable Stories & Novelettes
The Swamp Warden by my local friend Amber Scott
The Illusionist by my friend and co-author Elaine Cunningham
Plenty more are available here, short stories for a buck, novellas for five.


If you'd like to read some stories for free, many are still available at the web fiction page.


* Originally from the Council of Thieves Adventure Path
** Featuring the amazing artwork of Eric Belisle, whose illustration defined the look of Count Jeggare
Posted by Unknown at 5:07 PM No comments:

Very good progress catching up since the holidays. I'm well past my minimum word count for the week, but not quite back to my ideal output. If tomorrow goes as well as yesterday and today, I should be back in the "slightly ahead" category early next week, leaving me time for socializing and games this weekend.
Posted by Unknown at 3:54 PM No comments: