The Legend of Fong Sai Yuk 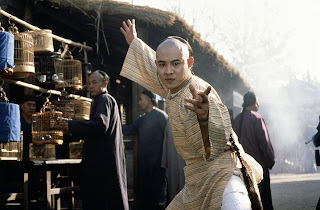 In North America, this Jet Li vehicle is known in a slightly different edit as The Legend. Released just two years after Li established himself as the iconic folk hero Wong Fei-hung, the movie winks at its star's previous role. Confronted by the police, Sai Yuk adopts the classic Wong Fei-hung fighting posture and declares his name is, “Wong …” with a suspenseful pause before he concludes, “… Jing” (prolific writer-director of The Evil Cult, another Jet Li film from 1993). That moment sets a playful tone, but only after a much darker introduction.

The framing story concerns a search for a list of names of members of the Red Flower Society, dedicated to overthrowing the Ching dynasty. The imperial agent (Vincent Zhao, aka Chiu Man-cheuk, who later replaces Jet Li for two of the Wong Fei Hung films) demonstrates such cool brutality that there’s no question he’s a Very Bad Guy. Yet after his brief introduction, Zhao vanishes for over an hour while the film shifts back to action comedy.

The dubiously reformed thug Tiger Liu schemes to win over public opinion by marrying off his daughter, Ting Ting (Michelle Reis), to the man who defeats Liu’s wife (Sibelle Hu) in single combat. Liu’s wife is an excellent fighter, swiftly dispatching the local hopefuls. While he does not know the identity of Liu’s daughter, Sai Yuk has already met the irresistible Ting Ting at a local athletic competition, but he throws the match upon mistaking a homely servant for the bride. Upon learning of Sai Yuk’s disgraceful loss, his mother (Josephine Siau) disguises herself as brother “Tai Yuk” to redeem the Fong family honor. Wacky gender-confused hijinks ensue. 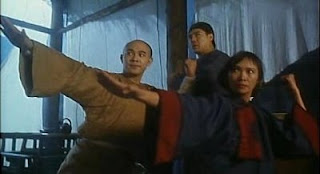 One of the film's most enjoyable relationships is that between Sai Yuk and his mother, who defend each other against Sai Yuk's authoritarian father. While the father's corporal punishment of son and wife alike should paint him as a brute, Madame Fong’s helpless passion for her husband’s poetry—and the fact that she’s a powerful fighter while he is a helpless noncombatant—takes the edge off of a dynamic that would otherwise seem like unforgivable domestic abuse.

Even when the imperial agent returns in search of Sai Yuk's father, who turns out to be an important member of the Red Flower Society, the action remains madcap until the first mortal casualties. Only then does the tone darken for a final act full of revenge and rescue. Director Corey Yuen provides plenty of breathless wire-assisted action while somehow marrying the humor and violence into a seamless whole.

While I can't think of any direct lifts of character types, The Legend of Fong Sai Yuk is one of many films that encouraged me to include both a few scenes of broad comedy as well as several powerful female fighters in Master of Devils. Now that I think about it, Josephine Siau and Sibelle Hu would be perfect as the Silk Sisters from Chapter Eleven.