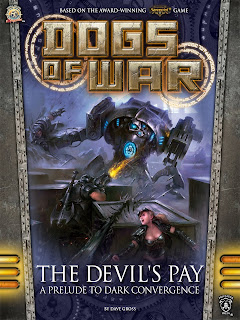 Something very cool begins next week.

Privateer Press will release the first three novellas in their Skull Island eXpress fiction line. These are stories taking place in the land of Immoren, the setting for the tabletop miniatures games Warmachine and Hordes, as well as the Iron Kingdom roleplaying game.

In a nutshell, it's the classic fantasy world +  big fighting robots of various denominations, from steampunk to H.G. Wells to something resembling anime mechs--yet somehow it all holds together in a rich and cohesive universe.

Veteran authors C.L. Werner and Larry Correia have written two of the first three novellas featuring iconic characters from the Warmachine and Hordes games, "Moving Targets" and "Instruments of War."

I've written the third, featuring the Devil Dogs mercenary company led by Captain Samantha "Sam" MacHorne. While she's the most famous Devil Dog, the story is about the entire company, especially Sam "the boys." "The Devil's Pay" falls somewhere between Aliens and Firefly in its combination of horror, mayhem, and dysfunctional family dynamics.

The novella also serves as a prelude to Dark Convergence, a novel introducing the setting's latest faction, a group of art-deco clockwork fanatics. That should be a pretty big deal, as it'll be the first substantial look players will have at the faction before its models are available later this spring.

I hope you'll check 'em out.

Here's where they're teasing new information. Go like the page, and you'll see all the new updates.

The stories will be available directly from Privateer and also from Amazon. I'll post direct links as soon as they're available.

Elaine Cunningham posts about the unbearable whiteness of most fantasy fiction. 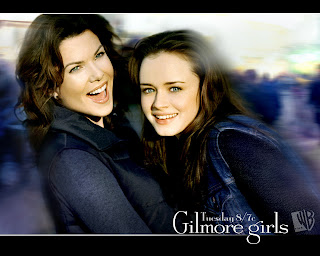 A few months ago, Mordicai Knode wrote a flattering overview of the Radovan & Jeggare novels at tor.com. One line that stuck out for me was, "Part witty banter and part brothers-in-arms, Varian and Radovan read like a cross between Gilmore Girls and Reservoir Dogs, smack dab in the middle of a sword and sorcery world."

Reservoir Dogs I knew and adored, but I'd only heard good things about Gilmore Girls. When I saw the first season DVD set was on sale, I snapped it up and watched the first episode a few nights ago.

Now I'm doubly flattered by the comparison and delighted to discover this gem of a TV series, which reminds me in the best possible way of Buffy the Vampire Slayer without the supernatural element.

I love finding something like this when the complete series has become affordable. I sense a binge coming on in April once deadlines relax their grip on my life.

So thanks twice, Mordicai.