The 36th Chamber of Shaolin

What I’ve been calling “kung fu” movies consist of a wide variety of films from high fantasy to historical action dramas. Even within the narrower realm of what we think of as martial arts movies, individual pictures range from relatively realistic depictions of hand-to-hand combat to wuxia romances in which the heroes fly like superheroes. 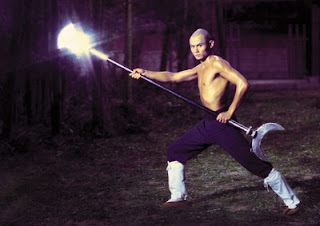 Many fans love some of these films but not others. Martial-arts purists draw the line at wire work, in which heroes can leap over the heads of their opponents or run along a wall—effects many North American fans encountered for the first time in films like The Matrix. Others find the gravity-bound choreography less exciting and prefer CGI-laden fables like the art-house wuxia of Zhang Yimou (Hero, House of Flying Daggers, and Curse of the Golden Flower). For many the sweet spot is in the middle, with films like Ang Lee’s Crouching Tiger, Hidden Dragon or many of the classic Shaw Brothers Studios pictures of the 70s and 80s.

Me, I love it all, as long as the movie is fun. I’m as keen on a great superhero movie as I am on a moving historical romance, so Chinese films have a lot to offer me. Of course, the first few times I saw some films that mixed wire-work with wacky comedy and revenge drama, it blew my mind. But once I saw how this mixing of genres and tones works, a whole new world of entertainment opened up for me.

Recently I’ve recommended films that folks depending on Netflix or other rental outfits have had trouble finding. For the next few weeks, I’ll focus on movies that are easier to find. If you check them out, please comment here, encouraging me to do more of these in the weeks and months following the release of Master of Devils.

You’ve probably heard the title of The 36th Chamber of Shaolin even if you’ve never seen the movie. Or perhaps you’ve seen the English-dubbed version entitled The Master Killer, a grindhouse sensation in the late 70s. Whether you prefer the subtitled original (as I do) or the dubbed version doesn’t matter. This is the film that made a star of Gordon Liu (aka Lau Kar-fai) and etched the kung fu training sequence into the psyche of North American audiences.

The story is simple and familiar: The young scholar San Te (Liu) witnesses the death of his family at the hands of the Manchu. He flees to Shaolin temple, where the monks initially refuse to train him because they know he has revenge in his heart. Gradually he learns the lessons of the monastery in a series of often-funny lessons described as the 35 Chambers. (There’s some comic relief in San Te’s training, but not so much as to make the movie a comedy. For that you will want to watch Return to the 36th Chamber, also starring Liu, this time as a different character.) In the end, San Te returns to the world outside the temple and gains his revenge, afterward establishing the 36th Chamber: bringing martial arts to the people.

While San Te is based loosely on an historical character, this story is almost 100% fiction. Even so, it deals with the real friction between the Chinese people and the corrupt Manchu government, so its message of righteous revenge resonates with virtually any audience. The iconic fight scenes come courtesy of Lau Kar-leung, the star’s adopted brother and one of the foremost directors and choreographers of kung fu movies.

The 36th Chamber of Shaolin was the principal inspiration for Dragon Temple and its training regimen, although perhaps the film’s most obvious influence on Master of Devils is the oxymoron of a peaceful monastery training students in martial arts. The film offers plenty of rich material for GMs looking to put their players through a demanding—and sometimes humiliating—training sequence. Also, no player should be allowed to give his character a three-section staff until after seeing this film.