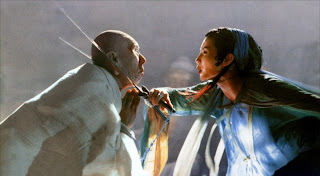 News of the upcoming The Sorcerer and the White Snake reminds me of one of my favorite Chinese fantasy films. Like many Hong Kong films, Tsui Hark’s Green Snake (1993) features strong women in the lead, this time as a pair of snake spirits who have learned over centuries to appear as human beings.

Maggie Cheung stars as the eponymous younger spirit. Joey Wang (A Chinese Ghost Story) plays her elder sister, known as Madame White Snake in the story by Lilian Lee (Farewell, My Concubine), which in turn is based on an oft-adapted folk tale. The sisters enjoy the mortal pleasures of romance, but when White Snake falls in love with a young scholar, Xu Xian (Wu Hsing-kuo), all hell breaks loose in the form of an uncompromising Buddhist monk (Vincent Zhao) who believes humans and spirits must never mix. When the monk confines Xu Xian to a sort of spiritual reeducation program, White Snake fights to free her lover.

Romance and physical comedy are the high points of the film. The undisciplined Green Snake can’t master the art of walking on two legs, and when she’s flustered her form reverts to that of an enormous serpent. Disguising her true nature is a key joke of the plot.

While the playful heart of the film includes some startlingly sexy scenes, bookending the antics is a lesson about the folly of moral absolutism. There’s a fair amount of wuxia action and a campaign’s worth of ideas for gamers thinking of setting an adventure in an Asian-influenced fantasy setting like Tian Xia.

Green Snake was a direct influence on the outline of Master of Devils, although later I decided against using snake spirits and instead devised a pair of sisters who deploy snake-like bolts of silk cloth as part of their martial arts repertoire.