The fine folks at Flames Rising have posted a survey of five of my favorite Chinese fantasy films. I hope this will make up in part for my last few weeks of conventions and catching up on writing.

The estimable Bill Ward weighs in on Master of Devils. Mild spoilers.


Movie recommendations are still on hold while I catch up on matters of immigration and writing.

Posted by Unknown at 8:12 AM No comments:

Join us on Monday, August 29, at 9:00 ET (6:00 PT) for an inquisition on the matter of Master of Devils, the latest Pathfinder Tales release. We'll probably also end up discussing Prince of Wolves and the other Radovan & the Count stories.

To join the chat, point your browser to chat.dmtools.org, choose a screen name, and type /join PFTales.

Among the treasures I found at Gen Con is a beautiful French translation of Prince of Wolves. It looks much like the US edition, with a slightly different title treatment and a crisp reproduction of Dan Scott's cover art. The paper is bright and heavy, and it's just gorgeous.

To call my French "rusty" would flatter me, but I can understand more of the translation than I'd expected. I can't shake the suspicion that I'm a better writer in French.

Thanks to Art Director Damien Coltice and the rest of the Black Book team for making sure a copy came my way.

I've chosen this week's wuxia recommendation, but I haven't made time to re-screen it since returning from Indianapolis. By the end of the week, I hope to catch up.

Until then, check out the latest Master of Devils interview, this time with Alana Joli of Flames Rising, one of the first sites to review Prince of Wolves last year. Soon they'll also post an essay in which I recommend a few more wuxia films.

Also, the Amazon release date has been sorted out, and are now shipping Master of Devils. The first review has gone up. There are more reviews (including one stinker) at Paizo and a few other sites.

Finally, for those attending When Words Collide in Calgary this weekend, I'll participate in one panel and, if the schedule is corrected, read a few chapters from Master of Devils on Sunday. If you want an extemporaneous reading before that time, the venue is "Bar" and the cost is "cocktail." Also, the fine folks from The Sentry Box will definitely have the new book as well as some of the older ones for sale in the dealer's room.

Posted by Unknown at 9:59 AM No comments:

Hero (2002) is the first in a thematic trilogy of wuxia films by director Zhang Yimou, previously known for art-house dramas like Raise the Red Lantern. That was until this film broke all previous box-office records in China and went on to critical acclaim worldwide.

Jet Li plays a nameless prefect who claims the bounty on three assassins who have previously tried to kill the king of Qin. By turning over the weapons of these famed warriors, Nameless receives rewards and is permitted to sit progressively closer to the king. Dubious that an unknown minor official could defeat the assassins who nearly took his life, the king demands that Nameless tell him the story of each battle. 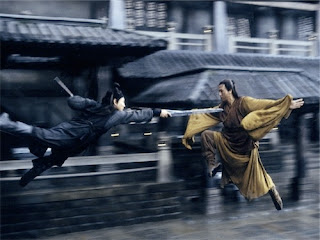 The first pits Nameless against the spear-wielding Sky, played by Donnie Yen. Wuxia fans had long desired a rematch between the two actors, who fought a famous duel in Once Upon a Time in China 2. While that fight scene is great, Hero tops it with a spear vs. sword contest set in a rainy chess court. The music, action, and choreography set the bar so high that it’s hard to imagine the film exceeding its first set piece … and yet it proceeds to do just that.

To defeat the lovers Flying Snow (Maggie Cheung) and Broken Sword (Tony Leung Chiu Wai), Nameless incites a jealous quarrel by requesting a scroll from the famous calligraphy school where they reside. As the Qin army attacks with clouds of arrows, Flying Snow and Nameless defend Broken Sword’s work in a display of epic-level deflecting of incoming missiles. After watching this scene, no Pathfinder player will ever again feel satisfied knocking aside a single arrow.

After the love triangle reaches its tragic climax, Flying Snow faces Moon (Zhang Ziyi) in a duel surrounded by falling autumn leaves. The flying and wind-mastery of this fight take the wirework to a new level, yet the grace of the performers (and SFX artists) will win over those averse to the idea of swordswomen soaring like superheroes—which is important for a following scene in which the combatants literally fly above a lake. 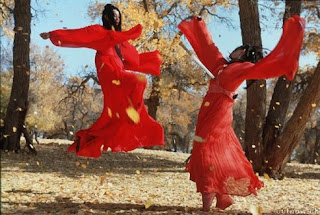 Later scenes show off different combinations of foes, each dominated by a different primary color, and finally revealing the true purpose that brought Nameless to face the king. The final twist of the story became controversial: The word “Tianxia” was initially translated into English as “All Under Heaven,” while later iterations changed it to “Our Land” to avoid the suggestion that the movie’s message was one of global unity by Chinese conquest. (“Tian Xia” is also the name of the setting of Master of Devils.) Regardless of the political fuss, critics and audiences loved Hero, and despite its art-house sensibilities, the film drew thousands more North American fans into the world of wuxia films.

The strongest influence of Hero on Master of Devils comes from its splendid fight choreography. Readers who’ve seen this film and Yimou’s other wuxia pictures (House of Flying Daggers and Curse of the Golden Flower) might also notice an echo of character names and a blend of heroic and tragic destiny.

Posted by Unknown at 6:01 PM No comments:

Interview at Seekers of Secrets

Jeffrey Tadlock at Seekers of Secrets asked me some great questions about Master of Devils and my other Pathfinder Tales stories. If you enjoy the interview or have questions of your own, please leave them a comment.
Posted by Unknown at 10:30 AM No comments: